A child pretends to go to school but hides underneath a small bridge while an adolescent waits for the bus with tear-filled eyes. A woman picks them both up in her car and, scared, they hide in the shopping mall in the outskirts of the city. 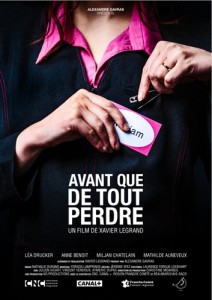 Before losing everything (Avant que de tout perdre) is told in real time, and the family’s tension while desperately fleeing becomes contagious. The actress Léa Drucker (Je me suis fait tout petit, Les Meilleurs Amis du monde) tries to find a shelter for her kids and herself while keeping her husband, actor Denis Ménochet (Dans la maison, Le skylab) from finding them. Fear and uncertainty dominate the thirty minutes of Avant que de tout perdre, where the fast paced action keeps the suspense from beginning to end.

Xavier Legrand studied at the National Dramatic Art Conservatory in Paris. He has worked as an actor in Au revoir les enfants, by Louis Malle and in Les amants réguliers, by Philippe Garrel. His first film Before losing everything, won four awards in the past edition of Clermont-Ferrand Festival, with great praise from both the jury and the audience.

The half-lenth film Before losing everything will be part of the Official Section of the 6th Edition of the International Half-Length Film Festival La Cabina, that will be taking place in Valencia, from the 8th to the 17th of November.