Stella is 12 years old and lives in a residential neighborhood dominated by a grey cement skate park. Her best friend is Fixer, a BMX enthusiast that she finds charming but slightly disturbing. When Stella’s mother decides to give her dog away to a sinister pair of twins, Fixer offers Stella a strange job in his father’s house so as to be able to pay the “ransom” to get her dog back.

This film by Joasia Goldyn is flooded with 80s aesthetics and also displays the influences of Gavin Watson’s photography and American filmmaker Harmony Korine. 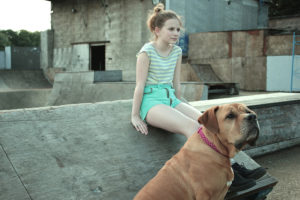 Goldyn is a Polish director and scriptwriter with a promising future that lives between Ireland and the UK. She started producing experimental videos and studied Journalism before settling on Film Directing. She produced her first work of fiction at the National Film School in Ireland, Fantabulous, which won the YouTube Dublin Pride Film Festival. She was admitted in the National Film and Television School to study an M.A. In Fiction Direction where she produced three additional films.

Cocoons is part of the Official Selection of the 8th Edition of the International Medium-length Film Festival La Cabina that will take place from the 5th to the 15th of November at the Filmoteca de Valencia.