A hotel-room late at night: a young man is carried from the room unconscious on a stretcher. A woman and a man remain in the room where all three of them obviously have spent some time together. Only then, when the ambulance attendants have left with the young man, do the other two realize that there is a hidden camera in the room and what happened has been recorded. Was it an accident? A love triangle? A drunken brawl or just something completely different? One after the other, the three people involved are questioned separately by two interrogators whom we hear but never see. During each interview, we observe the scene captured by the hidden camera as they attempt to respond to questions posed. Who are they? Why did they end up together? Was it something illegal? Something perverse? Who is the manipulator? The victim? Who are the interrogators? And what right do they have to demand answers? 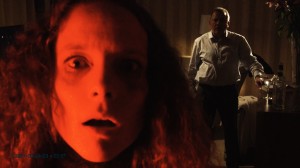 This strange but hypnotic 32-minute long film has been directed by Norwegian artist Lene Berg (1965). Berg studied film at Dramatiska Institutet in Stockholm. She has directed two feature films En Kvinnas Huvud (1997) and Kopfkino (2012) as well as more than fifteen video-projections and shorter films. Working as an artist, Berg integrates text, film and photography in her work. She explores relationships between contemporary images and inherited ideas; between facts and clichés; between structures of narration and ideology. In Dirty Young Loose (Ung løs gris) she shows her interest in what is not told and what does not fit the general picture or story. Her work has been shown at Whitechapel Gallery, London as well as the in Biennale of Sydney. She currently lives and works in Berlin and New York.

Dirty Young Loose (Ung los gris) is part of the Official Selection of the 7th edition of the International Medium-Length Film Festival La Cabina that will take place in the Filmoteca de Valencia from the 6th to the 16th of November.