A small theatre company is rehearsing Pygmalion, by George Bernard Shaw, days before the opening night. In this famous Victorian play, later adapted as Hollywood blockbuster My Fair Lady, phonetics professor Henry Higgins tries to improve florist Eliza Doolittle’s language, given that she has a terrible accent and uses inappropriate vocabulary. 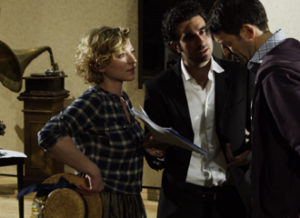 George Varsimashvili, director and writer of False Friends, displays two parallel action lines in this 44 minute long film. They both describe the impossibility of relationships between two people. On one hand, Bernard Shaw’s play; on the other the relationships established between the actors of the company, unable to understand each other.  Varsimashvili’s characters live in constant misunderstanding. Partly due to the fact they come from different countries, with diverse languages and linguistic customs; but also because, even speaking a common language, relating to another can be impossible.

False Friends is a film dedicated to lovers of plays with words and the comédie française du malentendu, but it is also a small homage to Bernard Shaw and his Pygmalion a century after it was written.

George Varsimashvili studied Cinema at the Paris 8 University. He has produced several short films and documentaries since 2009, such as Je t’aime (2010) or Magie de Cinéma (2011).

False Friends is one of the films selected for the Official Section of the 5th Edition of Valencia’s International Half-length Film Festival ‘La Cabina’.