Games (Gry), by the Polish Maciej Marczewski, is a fictional medium-length film based on the radio play The Elevator, by the Polish playwright, screenwriter and poet Ireneusz Iredyński. This short story takes place in an elevator where two strangers are trapped. They both decide to play an imaginary game about their first romantic encounter and their life together, but it all starts to get complicated when their fictional stories start mixing with their real experiences. What starts out as innocent entertainment becomes a dangerous game where emotions and the ghosts of intimate moments come out. 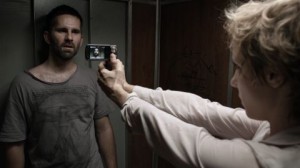 In the last years, Polish independent films have been thriving, with great technical and conceptual qualities that can also be found in short-films and medium-length films. Games is one of the titles that confirms, regardless of its short length, the quality of the new wave of Central European film. The disturbing encounter of these two strangers, the scene located solely in a stopped elevator and an atmosphere that becomes oppressive and loaded with tension and violence will surely shake the audience.

Marczewski, Games’s director, graduated in 2002 from the Theatre Academy of Warsaw and has worked ever since as a theatre and film actor. In 2013 he directed his debut film Games.

Games is part of the Official Selection of the 7th edition of the Valencia International Medium-length Film Festival La Cabina, that takes place in Valencia from the 6th to the 16th of November 2014.