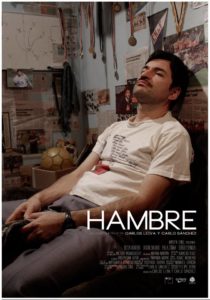 42-year-old Freddy is an obsessive trainer of a neighborhood soccer club. His dream is to raise the local championship´s trophy after thirty years of a scoring drought. There are only a few hours left for the important final match and a grave family incident jeopardizes his goal. Hunger is a family drama framed inside a soccer drama.

32-minute long Hunger is the latest film by Chilean filmmaker Carlos Leiva. Leiva studied Direction at the Catholic University of Chile. In 2008 he directed his first documentary short-film, The Son, which received main awards FESANCOR 2008, Valdivia 2009 and Ovalle 2009. His second short-film A Family Feel (2010) received the main award at the Patagonia-Aysén Festival and was selected for festivals such as those celebrated at San Sebastian, Milan and Sao Paulo.

Hunger is part of the Official Section of the 8th Edition of the International Medium-length Film Festival La Cabina that will take place from the 5th to the 15th of November at the Luis García Berlanga Hall of the Filmoteca de Valencia.