Lulu loves Henrik. She is the owner of an art gallery and he is one of her main clients. Henrik is married to Sophia but decides to invite Lulu to his house in the French Alps and, perhaps, start a new story together. However, Lulu´s anticipated holidays suddenly change when David, Henrik and Sophia´s son, arrives to the country house to prepare his final exams. Lulu and David´s relationship becomes closer while they both fight to get Henrik’s love and attention.

Lulu is a 46-minute-long story that reflects upon affective bonds through sexuality, love, gender issues and power relationships between three very different individuals. 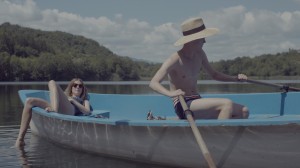 Caroline Sascha Cogez (1977) started her film career as an assistant director for Lars von Trier in films such as Dancing in the Dark, The idiots and Dogville. She later graduated in Film Direction from Danish Super 16 School. Caroline has written and directed several short-films that have been screened and received awards in festivals all over the world. In 2013 the Glasgow International Film Festival presented a retrospective on her work. She has also worked in video clip productions for groups such as The Raveonettes, Serge Gainsbourg, Animal Collective and Bjørk.

Lulu is part of the Official Selection of the 8th Edition of the International Medium-length Film Festival La Cabina that will take place in November at the Filmoteca de Valencia.