A small vengeance, a young girl asphyxiated by the weight of the past and an expert hunter come together in Miyuki, the Japanese thriller by Hideto Mori that lands in La Cabina with the best of the Asian suspense genre. 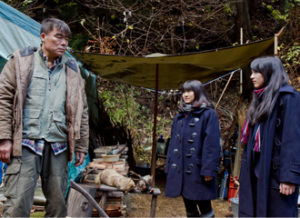 Years earlier her father tried to kill her, and Miyuki hasn’t been able to forget. One day, while she is walking through the forest, she runs into Kikuchi, a silent man that lives there, in a small hut. Miyuki’s visits to Kikuchi’s hut become more and more frequent while she becomes interested in learning his hunting techniques, until one day, suddenly, he disappears. The young girl will look for him until she finds him.

Miyuki is the first medium-length film by Hideto Mori, a young Japanese director that lives in Tokio and has recently directed short-film Kazoku.

Miyuki is one of the films selected for the Official Section of the 5th Edition of Valencia’s International Medium-length Film Festival ‘La Cabina’.