“Go and take a running jump” is a commonly used expression to get rid of someone that starting to become a bother. But it has also been used by director Mike Leigh as a word game that could refer to sports, an important topic of this medium-length film that was part of a series of movies produced by English directors to celebrate the 2012 London Olympics.

A Running Jump is a frenzied comedy where Leigh directs renown performers such as Samantha Spiro and Eddie Marsan, whom he had previously worked with in his feature films Vera Drake (2004) and Happy Go Lucky (2008). It is precisely in Happy Go Lucky where the audience can enjoy the crazy humor that also appears in A Running Jump. Leigh makes the audience contagious of the boundless hyperactivity a common east London family suffers through their passion for sports. 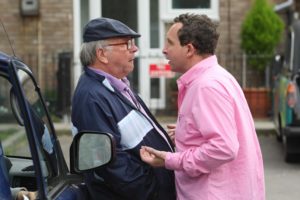 Regardless of the lyrical and paused filmmaking Leigh has displayed (for example in his last feature film Mr. Turner, that received four Oscar nominations last year as well as several awards in international festivals), the English director has a soft spot for the eccentricity of daily life and likes to surround his characters of a halo of absent-mindness and absurdity that, in A Running Jump, brings a many laughs to the audience.

This 38-minute-long medium-length film is a must-see for several reasons: an acclaimed director with a brilliant career in films and theatre; an exquisite cast with a vast experience; and comedy, loads of comedy, the dose necessary to skip the urge to send some spoilsports “to take a running jump”.

A Running Jump will be screened in the 8th Edition of the International Medium-length Film Festival La Cabina that will take place in November at the Filmoteca de Valencia.