Romy, a young au-pair, decides to visit her mother after two years of having no contact with her. Her mother, an aged prostitute that scarcely leaves her clients satisfied, initially shuns her, but eventually decides to make up for the lost time. The two women resume their relationship, even though the past and the memories require answers to many issues. Time has tainted their relationship and it won’t be easy to regain the love and trust they once had. 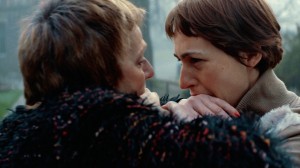 Sarah Adler, the actress that gives life to Romy, was also the main actress in Aya, medium-length film that received the Public’s Choice Award at La Cabina’s last edition.

Khalil Cherti, director of this 37-minute medium-length film, is the director and associate producer of the Company 2425 Production. In 2009 he directed La grande Muraille de Qin, selected at the Clermont-Ferrand Festival 2011. Since 2011 he has also worked for Kazak Productions, where he has produced his medium-length film Wherever comes the pain from (D’ou que vienne la douleur).

Wherever comes the pain from is part of the Official Selection of the 7th edition of the International Medium-length Film Festival La Cabina that will take place in the Filmoteca de Valencia from the 6th to the 16th of November.