A human brain is artificially kept alive by the scientists in a lab. Through the subjective vision of Ypsillon (the brain’s name), the audience becomes a witness of everything that happens in the lab. With black humor and with focus on the human relations, we follow Ypsilon’s path from mere consciousness to the development of a personality. 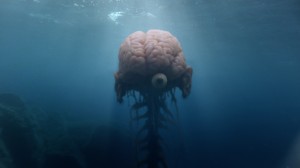 The medium-length film A living soul (En levande själ) by Swedish director Henry Moore Selder is based on the novel by P. C. Jersild. However, Jersild’s writing was inspired by the story William and Mary by Roald Dahl. Both in the novel and the medium-length film the themes are clear: ethics as an acquired quality, what is learned and what makes a human being human. Ypsillon will raise these existentialist questions in an innocent and sometimes hilarious way.

Henry Moore Selder studied Cinematographic Theory at the Stockholm University followed by Film Direction at the Film School of the same city. He has worked as the director of several advertisements and musical videos with bands such as The Hives. He is also part of the director’s association StyleWar that has been in charge of publicity campaigns of several brands as Nike, Audi and Mastercard. After a successful career in advertising, he has decided to return to his origins as a film director. His medium-length film A living soul received the Special Jury Award at the latest edition of Göteborg International Film Festival.

A living soul is part of the official Selection of the 7th edition of the International Medium-Length Film Festival La Cabina, that will take place from the 6th to the 16th of November in the Filmoteca de Valencia.