“Your place or mine?” is a question that, if they are lucky, night owls ask the girl that they are waiting for at the bathroom door or the boy that paid for those beers, with whom they’ve only just exchanged some funny memes at the bar. This is the idea behind the medium-length film Your place? by German director Sylvia Borges.

Freya and Max have just met on the dance floor of a club. When the lights are turned on, attraction does its thing and Max asks Freya the bold question: “Should we go to your place or mine?” Freya, a bit disappointed by Max being so blatant, proposes a different idea and they exchange keys and addresses. This is how a peculiar adventure starts while dawn rises on the city. 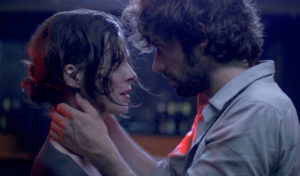 Your place? is a romantic comedy of our times, with no sweeteners or superfluous details: only coincidence and a very interesting proposal will determine the path of these two strangers.

Sylvia Borges (1983) worked as an Assistant Director, Stage Director and Theatre Director from 2002 to 2005. In 2007 she started her career in film at the Kunsthochschule für Medien in Cologne. 30-minute-long Your place? (2012) is her second film as a director. It has participated in festivals all over the world where it has received several awards.  Borges is currently preparing Lust, her first fiction feature film.

Your place? is part of the Official Section of the International Medium-length Film Festival La Cabina that takes place in November at the Filmoteca de Valencia.