In 1980, the director of The exorcist (1973), William Friedkin, directed Cruising, a controversial thriller that starred Al Pacino and was set in the leather bars of New York’s underworld. Pacino portrays an undercover policeman that infiltrates the gay subculture clubs to investigate a series of sexual crimes that had been taking place night after night. Friedkin had a difficult time with the Motion Picture Association of America, which censured 40 minutes of the film which were labeled as pornography. The Gay Community also felt deeply offended by Friedkin’s film and he received several death threats throughout the filming, which even paralyzed the production on several occasions. 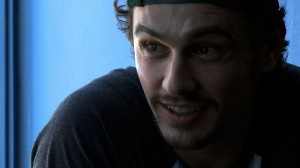 In 2013, actor James Franco together with scriptwriter Travis Mathews recovered Cruising and they both decided to film a mockumentary or false documentary under the name of Interior. Leather Bar. Franco and Mathews explain their decision to recreate the 40 censured minutes of Cruising through excerpts of the shooting, interviews with the actors and team and some sequences of the final production.

This medium-length film is an interesting work that doesn’t simply recreate the lost images of a controversial 80s film – instead, it proves how the filming of a movie such as Cruising that revolves around a taboo topic (homosexuality) still faces moral obstacles in the 21st Century.

Interior. Leather Bar is part of the Official Section of the 8th Edition of the International Medium-length Film Festival La Cabina that will take place from the 5th to the 15th of November at the Filmoteca de Valencia.