A pair of broken shoes is the cause for two silent strangers to meet.

Perhaps this is a simple love story, perhaps just the beginning of a friendship between two middle-aged adults that feel alone and too tired to fall in love like adolescents. Intermezzo is a beautiful story that takes place slowly, through gazes and half-empty rooms while the viewers, sitting comfortably in their seats, can’t stop staring at these two unnamed characters that move to the rhythm of Liszt and Paganini. 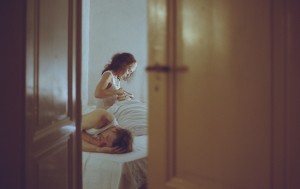 Igor Novic was born in 1982 in Calw, a small town in the Black Forest known for being the birthplace of German writer Herman Hesse. Novic studied German Language and Literature and Philosophy at the University of Tubinga. In 2008 he started his studies at the Film School of Cologne. From then on, Novic has produced several documentary and fictional short-films such as Das Gegenüber (2011), Das Haus Meiner (2012) and Rekonstruktion (2012).

Intermezzo is part of the Official Selection of the 8th Edition of the International Medium-length Film Festival La Cabina that will take place in November at the Filmoteca de Valencia.