In the fifth edition of La Cabina, a ridiculously humorous medium-length film in English by a Norwegian director made it to the Official Selection. The audience, quite perplexed, was divided between admiring and slandering its director, Jeorge Elkin. That medium-length film was called Wind Over Lake. Once again, a peculiar Norwegian story comes to La Cabina: Earth Over Wind, by director Joern Utkilen. It’s not a coincidence; and it’s not that all Norwegian directors have a similar name. They are both the same person: this is the new film by Jeorge Elkin, the same Norwegian director that managed to disconcert the Festival’s audience two years ago. 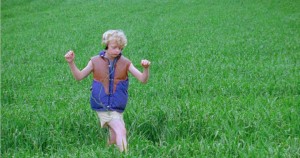 In this 40-minute long film, Utkilen takes us back to a calm Norwegian village where, once again, the cold wind from the water of the lake close by seems to have affected its inhabitants. Utkilen’s filming technique is undeniable, and his scripts are always comical and interesting. Most of the songs in the film are composed by Arvis Sletta, a well-known Norwegian artist; currently Utkilen is preparing a documentary about him.

Earth over wind is part of the Official Selection of the International Medium-length Film Festival La Cabina that takes place from the 6th to the 16th of November in the Filmoteca de Valencia.