After losing his partner in a mission, while being struck by lightning and getting bit by a Cobra at the same time, Kung Fury, detective of the Miami Police Department develops super powers that will help him defeat the red ninja. When he is assigned a new partner, Kung Fury decides to quit the force to work alone and confront a deadly robot arcade-machine. That same day Hitler, known as Kung Führer, devastates the precinct remotely through a phone call. At that moment, Kung Fury has computer wiz Hackerman send him back in time to kill Kung Führer and his Nazi army. 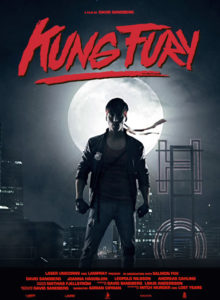 By now you should already be convinced that Kung Fury is the best movie ever, or at least the ideal movie of a generation that lived their childhood in the 80s and that always dreamt about a perfect combination like the one David Sandberg, Kung Fury’s director, has managed to mix in this 31-minute-long film. The wait has been worth it and the result is this crazy cocktail that is surprisingly coherent for, after all, everything fits in perfectly and who hasn’t dreamt of something similar already?

The technical aspects of Kung Fury are closely linked to this retro futurist nostalgia and imitate the VHS image quality, including its tracking. Most of the filming took place in Sandberg office in Umea where a huge green sheet was used as a backdrop for the action scenes to be recorded followed by an excellent post-production work that achieves the 80s action and phantasy special-effect look using a more evolved technology.

Thanks to crowdfunding, Sandberg raised more than 600.000 dollars for his first fiction film project which was presented world-wide a year later, at Cannes Festival where it received a warm reception from the audience and critics.

Kung Fury is part of the Official Section of the 8th Edition of the International Medium-length Film Festival La Cabina that will take place from the 5th to the 15th of November at the Filmoteca de Valencia.