Virgile is travelling with his brother by car when they have an accident. Virgile’s brother dies and a funeral has to be organized. Virgile’s guilt – he was driving at the time of the accident – is critical. His family has decided to exclude him from the funeral but Virgile, still injured, has other plans. 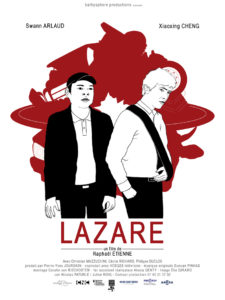 This divine comedy about death and coping transforms into a strange road movie with deliciously absurd moments. The main character of this story, portrayed by actor Swann Arlaud -known for his role in Les émotifs anonymes, by Jean-Pierre Améris- is incapable of getting over his loss and starts an escape forward with an old funeral car. Still traumatized by the accident, he decides to find an unknown driver to take him to his parents’ home in Toulouse together with his brother’s remains.

Raphaël Etienne studied Literature at the University of Nancy and specialized in Literature and Film. In 1997 he produced his experimental short-film Velocity and in 2005 he recorded his first half-length film À corps défendant that received several prizes and was distributed by television channel ARTE.

Lazare, by Raphaël Ettiene, will be part of the Official Section of the 6th Edition of International Half-Length Film Festival La Cabina, which will be celebrated from the 8th to the 17th of November in Valencia.