In the border between Iran and Kurdistan, a police sergeant and a soldier have to bury the unidentified corpse of a man who committed suicide. When they try to bury it in a nearby town, they run into the opposition of the villagers. This will happen several times while they go from town to town. Every time they are turned away, the need to bury the body becomes more pressing. 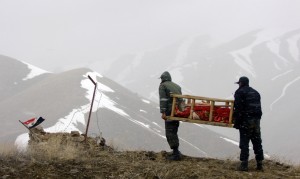 This medium-length film by Salah Salehi inevitably reminds the viewer of the myth of young Antigone, who disobeys her father’s order and buries her brother even though he has committed treason.

Burying the dead is a ritual that is born from civilization, an action that tries to give a place to a person that no longer exists but that we still consider our equal. Unkown (Namo), presents an interesting issue: what to do with the exception? If the corpse of an equal should receive a burial, what happens with the body of a man who committed suicide in a religion where suicide is considered impure? What to do with the body? Where can one find that small piece of land or that place where exceptions are found?

Unknown is a story that invites the viewer to a deep reflection. This medium-length film was awarded the Special Jury Award at the last edition of Clermont-Ferrand Festival and is part of the Official Selection of the 7th edition of the International Medium-Length Film Festival La Cabina that takes place from the 6th to the 16th of November in the Filmoteca de Valencia.