Christian is part of a scientific experiment with a new psychotropic drug. After the death of one of the participants, Christian and his girlfriend Anna discover that the doctors have covered up the incident. When Anna starts feeling the effect of the medication, Christian decides to escape and look for help. Nobody, nor the doctors nor the police will believe Christian because he suffers from paranoid schizophrenia.

The main character in Nocebo, Christian, is performed by Vincent Redetzki, who will be recognized by La Cabina regulars for his role in For Miriam (Lars-Gunnar Lotz, 2009) that participated in the 2nd Edition of the Festival. Redetzki was only an adolescent in 2009 and in Nocebo the audience can see this young actor’s career evolution. 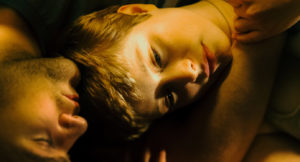 Lennart Ruff (1986) works in several advertising agencies in Hamburg and Los Angeles as a production assistant in films and ads. He graduated from the Film and Television School at Munich (HFF). He has produced several short-films such as Keine besonderen Vorkomminisse (2009) and Life is Easy (2010). The medium-length film Nocebo (2014) received the Student Academy Award of the American Film Academy as a foreign film.

Nocebo is part of the Official Selection of the 8th Edition of the International Medium-length Film Festival La Cabina that will take place in November at the Filmoteca de Valencia.