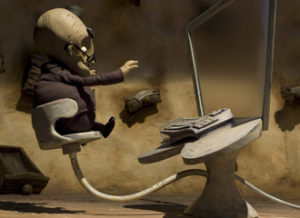 The story of this film is inspired by Czech author Jan Werich’s Fimfárum. The author described this book as “a collection of fairy tales, not necessarily for children”. Reason and Luck is one of those tales inspired by classical Greek fables, where a small philosophical lesson is given, displaying complex ideas in a language everyone can understand. Werich’s story and Sukup’s imagery blend to perfection in this animation film.

This half-length film, together with The Hat and the Little Jay Feather by Kristina Dufková, have been released this year under the title of The gardener who wanted to be king.

David Sukup was born in Prague in 1975. After finishing high school, he worked for two years (1994, 1995) in the famous Jiriho Trinky studio. In 1996 he started his animation studies at Zlin’s Film School. He is currently still studying animation, now at the Film & TV department of FAMU in Prague. In 2006 he participated in the visual effects of Tom Tykwer’s Perfume: The Story of a Murderer.

Reason and Luck is one of the films selected for the Official Section of the 5th Edition of Valencia’s International Half-length Film Festival ‘La Cabina’.