Henriette (Andrea Braein Hovig), a highschool teacher, narrates in detail her love story with one of her students, fifteen-year-old Daniel.

Throughout the 53 minutes of this medium-length film Henriette is the main character: a fixed shot in the teacher´s kitchen where she monologues about her relationship with Daniel from its beginning. It´s, without doubt, a risky directorial decision where he manages to keep the audience hooked on a story where they won’t want to miss a detail and which is based on true facts.

It is neither a confession nor a search for redemption. Henriette is simply telling her story. What happens if fan adult falls in love with a minor? Is it possible? Where are the moral limits when love speaks? Controversy is served. 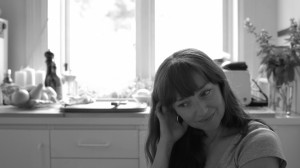 Andrea Braein Hovig (1973) is a well-know film and theatre actress in Norway and, thanks to her subtle performance, the audience will be hooked to the screen.

Dag Johan Haugerud (1964), director of I am the one that you want, has directed several films of all lengths. In 2012 he directed the feature film I belong that received several awards, including the Best Norwegian Film Award at the National Amanda Festival in 2013. His medium-length film I am the one that you want was screened in last year´s edition of the Goteborg Festival which was celebrating a homage to the actress and filmmaker Liv Ullmann.

I am the one that you want is part of the Official Selection of the 8th Edition of the International Medium-length Film Festival La Cabina that will take place in November at the Filmoteca de Valencia.