Sally lives committed in an institution with other adolescents where their supernatural powers are treated as if they were mental illnesses. Sally, the main character of this story, dominates telekinesis, and Tingeling, a young sociopath is able to communicate telepathically. The friendship between Sally and Tingeling grows when they decide to rebel against the institution and the control it exercises over its patients. 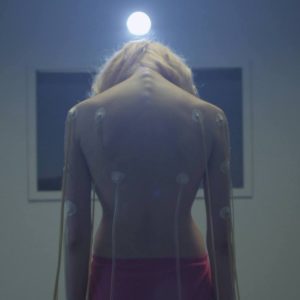 Teenland can be included in the genre of films that portray classical psychiatric institutions such as One Flew Over the Cuckoo’s Nest (Miloš Forman, 1975) or Girl, interrupted (James Mangold, 1999) but visually, this medium-length film depicts a chaotic pop universe (the nurses’ uniforms are bubblegum pink, the pills they are given are bright purple). On the technical side, Teenland achieves an excellent result. The special effects produced by Freddie Smith are comparable to any of the main sci-fi productions.

Marie Grahtø Sørensen is a film director that lives in Copenhagen. She was named in 2013 a “Director to watch” by Danish magazine Ekko. Daimi (2012), her first short-film, travelled throughout the world and received a Danish Film Academy nomination as the best short-film in 2013.  Her film YOLO (2013) has participated in all the most important LGBT Festivals in the world, such as San Francisco’s Frameline38.  Teenland (2014) has been selected for the upcoming editions of Palm Springs International Film Festival and the Nordic Panorama.

Teenland, by Marie Grahtø Sørensen, is part of the Official Section of the International Medium-length Film Festival La Cabina that takes place in November at the Filmoteca de Valencia.