There is always a neighbour who never reveals himself. He is assumed to be a good neighbour because he complies with his civic and communal responsibilities, but we have never seen his face. However, this mysterious neighbour does know our life and is always right next to us, watching every move we make, listening to every word we speak. 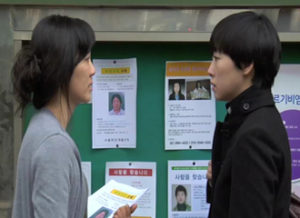 Jin-young, the main character of this disturbing film, Your Kind Neighbour, has just moved into a new apartment and is very interested in meeting her evasive neighbor, whom she knows nothing about. In this 36 minute long film, terror, fantasy and suspense are combined in a pure Korean style.

Sohn Won-pyung was born in 1979 and has graduated in Film Direction by the Film Academy of Korea. Won-pyung has directed several short films, including titles such as Is Your Eyesight Good Enough? (2003) and A Two-way Monologue (2007). Your kind neighbour participated in the past edition of the International ‘Daegu’ Festival of Korea.

Your Kind Neighbour is one of the films selected for the Official Section of the 5th Edition of Valencia’s International Half-length Film Festival ‘La Cabina’.