28-year-old Sarah is an artistic photographer that is obliged to return to her small Irish hometown of Newry where her mother lives, after not being able to build a successful career. She is unable to confront her new reality and decides to leave on a road trip with her two adolescent friends in an attempt to escape the routine of the situation she is currently in, working at a pet store. During the trip, the fights the two boys have over her become dangerous and Sarah has to make a decision about her future and how she will confront the reality that awaits after the trip is over. 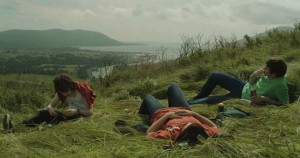 Cathy Brady, director of Wasted, has received several awards for her short-films Small Change (2010) and Morning (2012).  She has worked in film and television. Her 33-minute-long medium-length film Wasted was selected for the 2013 edition of the Edinburgh Festival.

Wasted is part of the Official Section of the International Medium-length Film Festival La Cabina that takes place from the 5th to the 15th of November at the Filmoteca de Valencia.