Natural and impure, the story of the medium-length film Les Vertueuses

In Les Vertueuses (Women of Virtue) by Stèphanie Halfon, the emphasis is once again placed on the question of the body, the changes and difficulties that go through it. Unlike The Dress, in the French director’s film the body is not “imprisoned”, it is bound by an excessive and unhealthy modesty.

Etel is a nine-year-old girl, belonging to a Hasidic community in Paris, governed by strict rules of behavior. The protagonist is female, she was born to be a wife and mother and her first menstruation, however precocious, represents the initiation rite to an already written life path. For family members and other members of the community, puberty implies specific burdens: compliance with domestic duties, exclusion from community meetings and prohibition of sexual relations with the spouse during the impure period in which the womb cannot be fertilized. Yet in an idyllic setting of solid certainties, colorful celebrations to the rhythm of mazel tov, Etel is restless “attacked” by a body that changes quickly and whose dynamics do not depend on her. Blood is the element of division: it generates disgust and repulsion, but at the same time it must be kept, since it is what ensures the natural reproductive process. The physical development of Etel is not a private matter, but on the contrary, a matter of public interest, in which the whole community participates and which it undertakes to preserve. 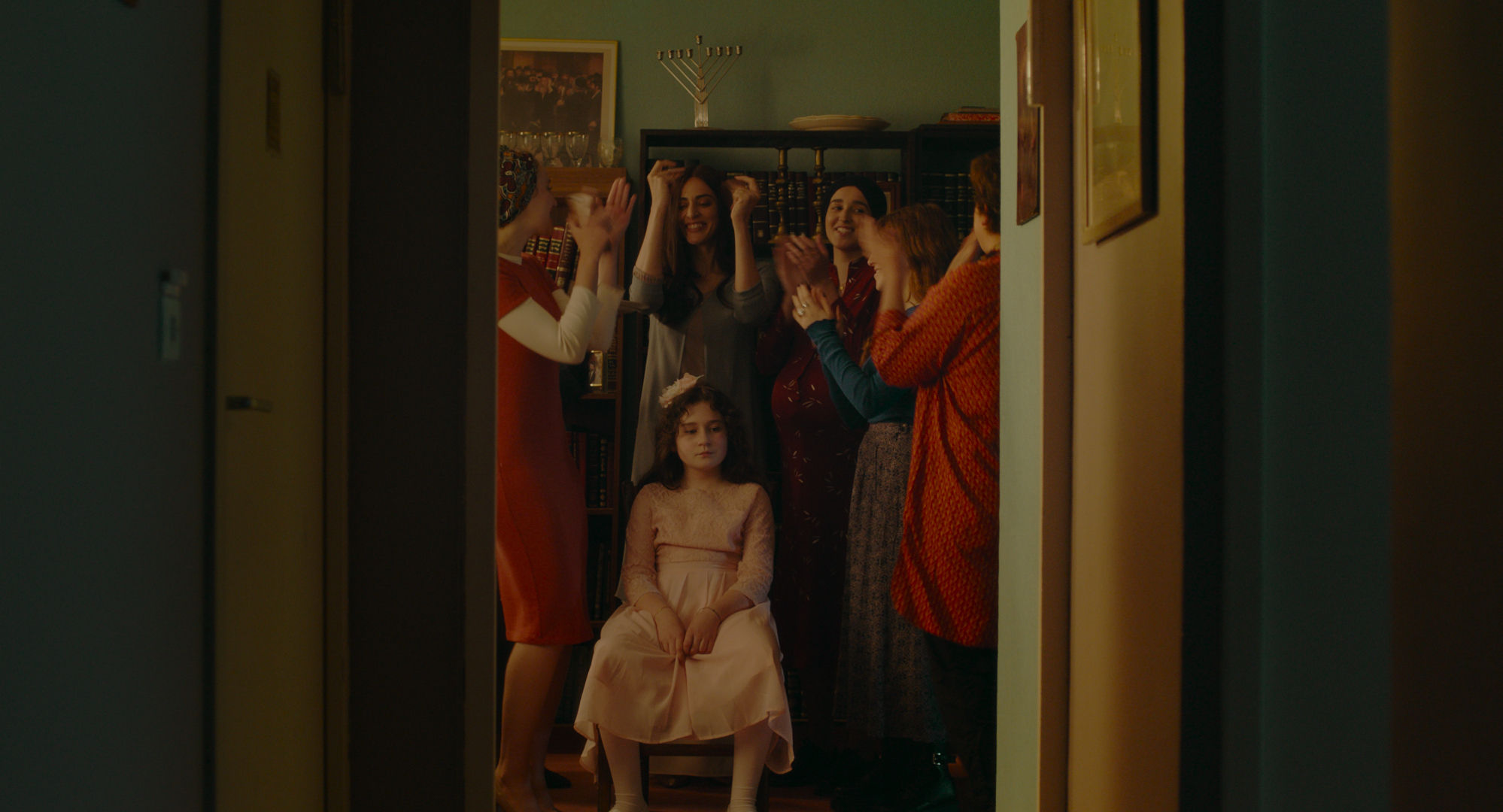 Etel became aware of the red stain on her nightgown after accidentally coming across a pornographic video. The narrative choice of the coincidence of the two episodes is not accidental: Etel interprets the events according to the codes that have been taught to her and she fears that there is a correlation between them for which she is responsible. Forbidden sexuality has generated immorality and contamination of purity through bleeding; we must get rid of it quickly, but not because it is too early and as such potentially harmful to health, but because it is dirty, a temporary impediment to procreation, the only purpose of coitus.

During her first gynecological visit, an enlightened doctor pushes Etel to undergo a treatment to delay puberty, thus avoiding negative consequences during growth. The doctor’s invitation is oriented towards the well-being of the girl, but her mother Myriam opposes it because arresting a biological course is an offense against God. Given the context of origin, the answer cannot surprise the viewers, nevertheless it does not exempt them from perplexity and veiled bewilderment. In fact, while trying to adhere to the mentality of a complex and difficult to share cult, it is in the same teleological precept that the director traces the underlying contradiction through images and meaningful dialogues: how can something natural be considered impure? How can the divine will coexist with shame?

The meeting of the young protagonist with the gynecologist is in this sense a revelation for several reasons: the pornographic video did not in any way produce bleeding, nor unleash divine punishment; what happened to her is completely natural, only premature, and that is why it must be faced. The fictitious forbidden sexuality-bleeding dichotomy is cleared, and the events traced back to their real scientific cause. Yet what seems like a simple doctor-patient conversation turns into a touching, mutual acquittal of crimes never committed. Tears flow freely, they claim the same menstrual blood that has not been granted the right to manifest itself without arousing repugnance. At the end, Etel chooses to undergo the treatment, exercising for the first time, the legitimate right over its own body.

The moment in which Ethel, after communicating her decision to her mother, plunges into the mikveh, is a scene of extremely high directorial value. Ethel’s immersion in the tub does not have, as expected in the Torah a purifying value, but the purpose of emancipation and redemption and that’s why it seems sensational. A wonderful photograph in which the blue of the swimming pool, the enveloping power of the water, and the whiteness of Etel’s skin merge into a single poetic-artistic solution. The embrace of Etel and Myriam with which the film closes goes far beyond the mother-daughter affection; it is in fact a symbol of inter-generational solidarity by virtue of which we fight for female self-determination.

The film has a very measured rhythm, in which the moments of depth and introspection that form the center do not weigh down the vision, making it enjoyable from the first minute to the last. Despite the evident cracks present in the family circuit, Etel is a serene child, sincerely loved by those around her, immersed in an atmosphere of light and well-being that the director underlines through the use of joyful images and music. Only the encounter with a female figure external to the family and community to which she belongs leads her to a new level of awareness, suffering and rebellion are  necessary conditions for self-affirmation.

Les Vertueuses is a delicate and powerful human story that recounts the painful and heroic transformation of a little girl into a woman, and the pride in autonomous fulfillment of the growth path.

Master in Communication of culture and entertainment at the University of Catania. Martha is a communicator, cultural journalist and film critic.