These are the conditions of the contract that fifteen-year-old Marysia gives to Jan, an aged high-school teacher. They both meet at a hotel where Marysia is going to sell her virginity, and she has very meticulously organized everything. She decides to change her mind, but a few days later, meets again with Jan to fulfill the contract. 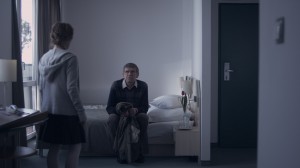 Piotr Litwin, director of Flora and fauna, was born in Moscow but grew up in Poland. In 2002 he started his studies in Law and Social Sciences at the University of Warsaw. In 2007 he starts his Film Studies at Lodz. Flora and Fauna is his first medium-length film and has screened at several international festivals.

Flora and fauna is part of the Official Selection of the 7th edition of the International Medium-length Film Festival La Cabina that takes place form the 6th to the 16th of November in the Filmoteca de Valencia.