Hajo is 19 years old and a year ago he became a dad. Suddenly his life has given an unexpected turn and he must find a job and earn money and support his small son. Hajo has a plan, but it will put his infant son in danger. 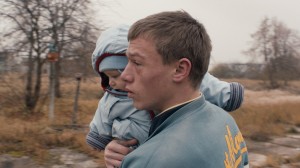 The difficulties of becoming an adolescent father, life in a troubled neighborhood and the complications of combing a precarious job with paternal responsibility unite in this 37-minute long medium-length film with Hajo’s wish to protect his son and care about him. Throughout the film, we follow the hectic rhythm of the main character with his son, in a desperate intent to solve their problems.

Barbara Ott (1983), director of Sunny, has worked in many productions in Germany and New Zealand. In 2006 she started her Film Direction studies at the Filmakademie Baden-Württemberg. She currently lives and works in Berlin as a script writer and freelance director.

Sunny is part of the Official Selection of the next edition of the International Medium-length Film Festival La Cabina that takes place from the 6th to the 16th of November in the Filmoteca de Valencia.